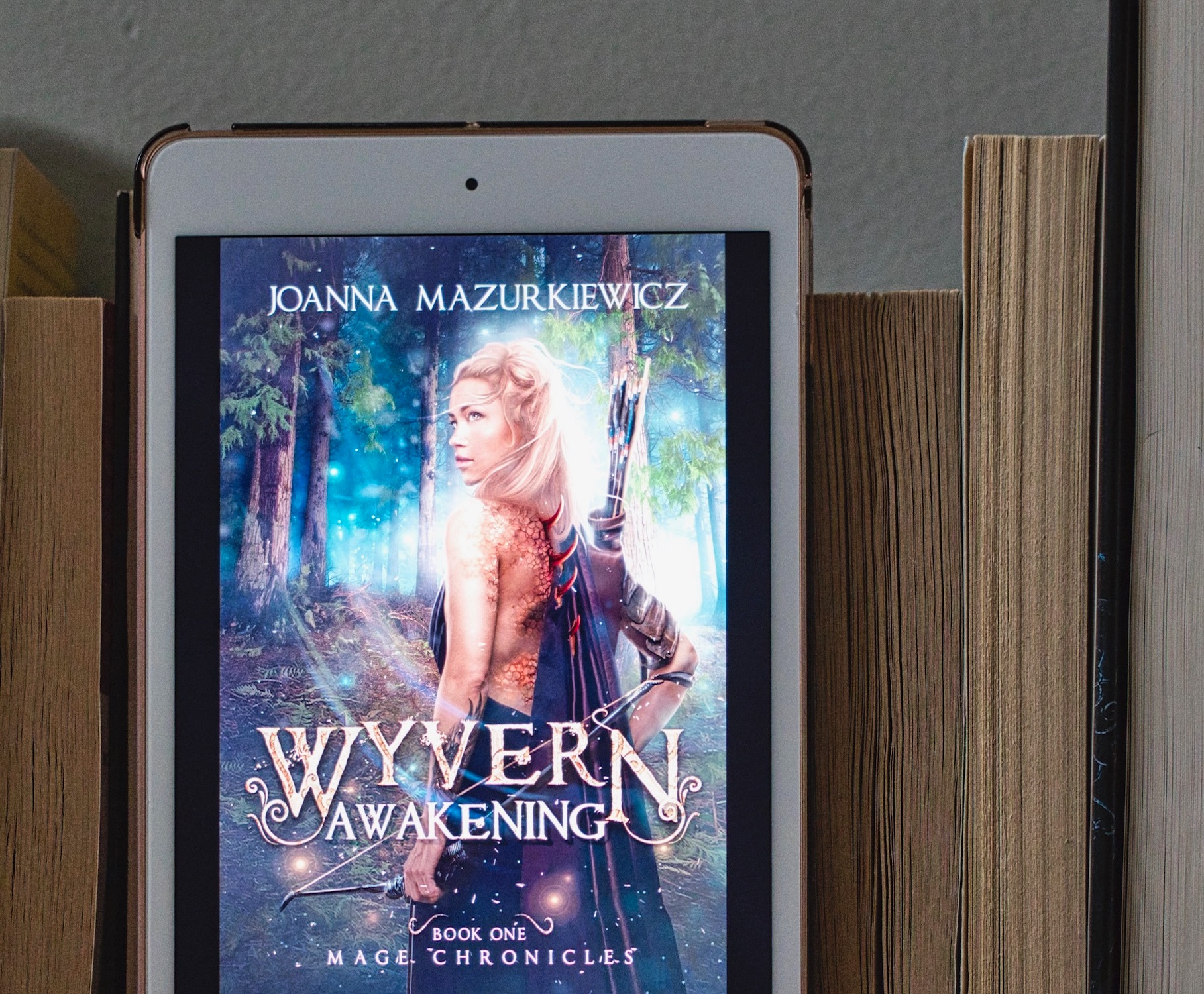 Collective Favorite Quote:  “Do you want me to go and punch him or fart in his face?” -Lenin

Today we will be reviewing Wyvern Awakening (Mage Chronicles 1) by author Joanna Mazurkiewicz.

Please see above for more details on the book.

This story is about a dragon shifter named Astri. Her parents were killed by a mysterious mage shifter, and Astri is left scarred. Astri struggles with living in her Aunt and Uncle’s home, when the Duke is looking for an assistant. Astri finds herself not only able to get out of her horrible home, but becomes one step closer to getting her revenge.

We love our dragon books, how does this one compare?

Bridgette– I do love a good dragon book. As many of you know, my adventures in reading indie books, which started last year, began with The Darkest Drae series by Kelly St. Clare and Raye Wagner. It was quirky and grabbed my attention quickly. Since reading that first book, I have picked up several other dragon books and loved them in different ways. This book was good in its own way. I enjoyed the new twist I hadn’t read before with the extinction of a particular type of dragon. This book checks a lot of boxes for me, not only with dragons but also some mystery, overcoming adversity, and difficulty knowing who to trust.

Amy– This one is slightly different, there seems to be some interest but not a lot in another person. Which for me is kind of a big deal. I didn’t hate it though! I loved the strong person Astri was without looking for a man. I wish there was more information on types of dragons but I’m sure that will come!

Claire- Dragons, revenge, and scar tissue that I wish you saw 🎼 (just kidding, everyone saw) made this book a good introduction to its series. It started a bit slow but really picked up the pace and included many characters that intrigued me. Many things were predictable which resulted in a lack of tension but it was a good, quick read nonetheless.

Amy- Lenin, The Aunt, and the Duke Jorgen of course!

Did this book have your attention?

Bridgette- This was a quick read for me and kept my attention throughout. I felt like the story had really great elements to keep me hooked. There were times when I was distracted by the way certain things were written throughout the book, but overall I really enjoyed the story. There were characters who had me laughing, characters who had me cringing, and still other characters who made me feel warm and fuzzy inside. The story really moves along and I am able to identify with it through the key themes of self-acceptance, trust of others, and struggling for survival while trying to do the right thing. I think we can all relate in one way or another with these themes.

Amy- Like I said surprisingly without any love interest, it did keep me occupied. I really enjoyed the trials Astri went on, and the butt kicking capabilities she has!

Claire- This novel presented a unique story with interesting characters and an attractive fantastical world. That being said, the plot itself was told with the poise of a teenage fanfiction writer, who I am sure would tell the story in a more engaging manner if given the opportunity. It was hard to keep up with the author who would add conveniences where necessary with little explanation.

Do you think you would have stayed with Astri’s Aunt and Uncle as long as she did?

Bridgette- I can see how Astri would have felt trapped and pressured to stay with her aunt and uncle. The grass is always greener on the other side. It is difficult knowing that without her invitation to compete as an apprentice for the duke if she could have thrived in a world outside of her aunt and uncle’s home. The world she lives in is a complicated one with plenty of prejudice and violence. In a perfect world, no of course you don’t stay with them, but in reality it is easier said than done.

Amy- Uh no. I think I would have lived in the sewer with Pennywise instead. They were pretty horrible, and I’m sure they had money to cover the cost of living. They kept her in the basement, and treated her like dirt. I would have hit the road a long time ago.

Claire- As if Astri didn’t have enough trauma in her life, she has to live with a couple of guardians who had no more charisma than Hitler himself. That being said, I would have gotten out of dodge real quick. My vengeance has no time to waste. Smell you later, losers.

What do you think of the relationship between the Duke Jorgen and Astri?

Bridgette- My personal opinion from the start was Astri’s memories aren’t serving her correctly. The mind is able to influence us immensely, oftentimes to help protect ourselves. I think Astri ought to have reorganized her mission to gather intelligence before allowing anything to happen to the duke. The relationship between the two is clearly building to something so much more. If given time the two could change the world, but events in this first book may destroy a possible future of this alliance. I may have also been secretly hoping for a love story to pop up somewhere in there. I hold out hope.

Amy- It was very confusing. I still don’t know what to believe. Is he good? Bad? I want to know more, and find out what happens from here.

Claire- Misplaced? Like, at one point in the book Astri is telling him she lived with her torturous aunt and uncle for so long because she had to and that apparently was the perfect time to try and kiss her? Oh wait, this potential makeout sesh is quickly recovered by the duke’s repulsion. If I had even the slightest inkling that this person killed my parents, my radar would be zoned into using this person exclusively to my advantage. This begs the questions; why would Astri even consider using her alleged womanly woes to her advantage when she has such poor self-esteem? This ain’t etch-a-sketch, gf. He’s a bad guy. *shake shake* Maybe he isn’t. *shake shake* Maybe he is.

Do you think Astri made the right choice by not helping the Duke?

Bridgette- I would have liked to have read a different ending to this story, but the ending certainly has me interested to find out where the story will go in future books. She would certainly have won the competition and when she was closer to the duke would have access to information to help her determine the right way forward. In my opinion, Astri would also feel more fulfillment if she were the one to pass sentence to the duke.

Amy- I think Astri will find that she made a mistake. I think she should have saved him before he lost it all, and did more digging when she became his assistant.

Claire- I could certainly argue both sides of this question but ultimately her revenge was bittersweet. She watched him suffer as she did, however, it seems victory has defeated her. And that’s the worst kind of winning.

Do you feel like this book is worth picking up? Will you continue this series?

Bridgette- I think any book is worth picking up because you can learn a lesson, good or bad, by reading a variety of books. I do think this book can be enjoyed by a variety of readers while sending positive messages to readers. I think the mystery, themes, and personal struggles in the book will allow readers to find something in the book to enjoy. There were some aspects of the writing I found distracting; however, this book is certainly worth the read and I will be continuing on with the series.

Amy- During this pandemic anything is worth picking up! I thought it was good and would like to continue with book 2!

Claire- Just like socks and sandals, I have mixed feelings about this pick. I like books that offer fresh perspectives and unexpected twists that accompany the freedom of wearing sandals with no socks but the security of the predictable plot was cushioned by the material found between my foot and its shoe. I’m not opposed to continuing the series in the hopes that the action increases and the predictability recedes.

Thanks for reading. Comment below if you have read Wyvern Awakening (Mage Chronicles 1) by author Joanna Mazurkiewicz or if you are going to put it on your TBR!

Disclosure: We are in no way affiliated with the author and are not being compensated for this review.

Looking for something? Type below…